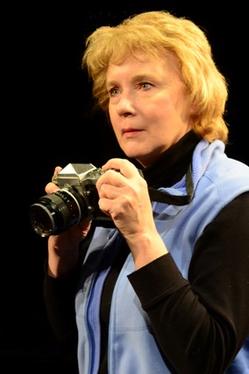 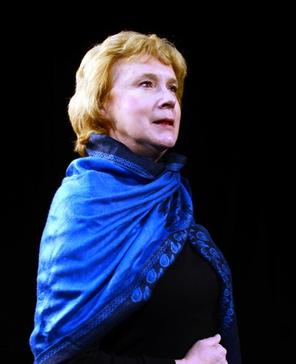 Written and performed by Lisa Hayes, Finding the Light is a one-hour solo performance that follows Pulitzer Prize-winning photographer Marissa Roth’s personal and professional journey with the story of women and war. Using photographs from Roth's exhibit "One Person Crying: Women and War," Hayes portrays Roth, sharing the stories behind the photos of women from Cambodia, Vietnam, Bosnia, Albania, Germany, Afghanistan, and America

The play was developed in response to an invitation Hayes received to perform at the European Association of American Studies’ conference in The Hague in April 2014. The invitation came after one of the conference organizers saw Hayes perform her one-woman show Nurse! at an international American Studies conference in Turkey in 2010. Hayes used the opportunity to create a new show that would directly address the theme of the conference - “America: Justice, Conflict, War.”

Looking for inspiration and ideas, she googled the terms “women and war” and discovered the photographer Marissa Roth. After reading about Roth’s personal journey with creating what became a documentary photo exhibit on women and war, Hayes sent an email to Roth, telling her about the conference and proposing to create a one-woman play about Roth’s journey with the topic of women and war. Would Roth be interested in discussing the idea? The answer was “yes.”

In addition to giving permission for the use of her photographs, Roth shared her notes and writing on this project. The two artists finally met each other when Hayes flew to Los Angeles to interview Roth in person. After Hayes completed a first draft, she began working with director Kathryn Chase Bryer, who was instrumental in helping Hayes shape the journey of the play.

The play debuted on April 4, 2014 at Leiden University College in The Hague as part of the 60th Anniversary Conference of the European American Studies Association. It was since been featured at the F. Scott Fitzgerald Festival in Maryland and the United Solo Festival in New York.